I joined Twitter a year ago, and I went into it kicking and screaming. I was at a conference and the session was about social media and education. Everyone went around the table introducing themselves and they gave their twitter handle. I was the only one without one. I might as well have said I don’t know what a computer is. The next 45 minutes of the session was focused on convincing me how important and useful it would be if I joined Twitter. I took their word for it and had my account before we left the room. I’m glad I did.
I spent the next few months creating a network of teachers who I follow and who follow me. I have taken part in chats, which occur in the ungodly hours of early Saturday and Sunday morning, and I’ve met people in real life that I’ve only known online. It’s a constant stream of influence for me, and I check in whenever I need a shot of inspiration.
The highlight for me this year on Twitter was when I commented on a book I read from a famous author. I tagged him in the tweet, and he responded to it! How cool it that? I can reach out to someone who inspires me and they can acknowledge it immediately. Think of the possibilities for our students.
After that, I became a full member of Team Twitter. I see the effects, and I’m a better teacher for it. My students are too young to join, but that doesn’t stop me from creating a profile for our school to share with their parents.
So as I reflect on my twitterversary, I came to it reluctantly but I was reminded of how Twitter is like all of technology, in that I still have much to learn.
Follow me at @eileen_lennon.

I spoke at ISTE!

Me and the tax write offs 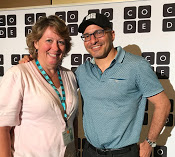